Twelve months ago, the narrative was that we were heading into another “Roaring 1920s”, with the global economy set to see years of high growth as it emerged from the pandemic. What a difference a year makes; the narrative has now flipped as concerns about a recession have spread. In this note, I’ll describe whether this latest story is any more convincing than last year’s and what our views and concerns are for the year ahead.

“Recession fears escalated following a brief inversion in the spread between the two- and 10-year U.S. Treasury yields.”

Recession fears escalated following a brief inversion in the spread between the two- and 10-year U.S. Treasury yields. Inversions occur when yields on short-dated bonds rise above those of long-dated bonds, “inverting” the usually upward sloping yield curve where the longer the maturity, the higher the yield.

The curve has inverted ahead of every U.S. recession over the past 50 years, with only one false positive in 1998. Therefore, it’s about as reliable a recession indicator as we will get. Ignoring the yield curve means betting against history.

However, the problem today is that the yield curve has been distorted by central banks and the effects of their Quantitative Easing (“Q.E.”) programs over the past decade. They have compressed the spread of yields from the short to the long term and pulled down yields at the long end of the curve, making it more prone to inverting. Due to this distortion, we suspect that the yield curve may have lost some of its predictive power.

“There are few signs of significant imbalances in the U.S. or Canada that have typically preceded recessions.”

There are few signs of significant imbalances in the U.S. or Canada that have typically preceded recessions. Although Canada’s housing market has been overheated for quite some time, prices will likely fall for the remainder of the year, providing some relief, which will also negatively impact GDP growth. Household balance sheets are unusually strong, which provides grounds for optimism for a “soft landing,” whether that be a mild “recession” or the economy slowing considerably but never actually contracting. Our view is that we will experience a protracted period of below-trend growth, but we don’t believe that the Canadian and U.S. economies will buckle under higher rates. If a recession does materialize, it will likely do so in Europe. Growth is lower in Europe, having been behind in the recovery from Covid-19 before Russia threw a wrench in that recovery. As a result, the surge in commodity prices has squeezed incomes in Europe to a larger degree than in Canada or the U.S. However, we believe that a recession in Europe will be small and short-lived.

The lesson here is that investors should not let themselves be seduced by simple stories. Reality is invariably more complicated and nuanced than the prevailing narrative suggests.

“U.S. technology stocks have borne the brunt as the S&P 500, the broad market index of U.S. equities, having now declined approximately 18% in USD terms. Half of that can be attributed to a handful of technology-driven stocks…”

So, Where Do We Go from Here?

Broadly speaking, global equities are down year-to-date, but their fall has not been equal across all sectors and geographies. U.S. technology stocks have borne the brunt as the S&P 500, the broad market index of U.S. equities, having now declined approximately 18% in USD terms. Half of that can be attributed to a handful of technology-driven stocks (Microsoft, Apple, Amazon, Alphabet, Facebook-parent Meta Platforms, Tesla, Nvidia, and Netflix). In Canada, technology darling Shopify is down 73%, reducing the TSX’s returns YTD by a remarkable 5.56%.

“From our perspective, there are two headwinds for markets over the next year: valuations and earnings expectations.”

From our perspective, there are two headwinds for markets over the next year: valuations and earnings expectations. We’ve discussed valuations in detail previously, but it bears repeating: What we are seeing happening in markets is multiple compression – i.e., the price that an investor will pay for future earnings. A higher risk-free rate – which results from rising interest rates – means that for taking on the same amount of risk, an investor will demand a higher rate of return in compensation for that risk. This applies to all risky assets. In particular, growth stocks are experiencing significantly larger multiple compression. 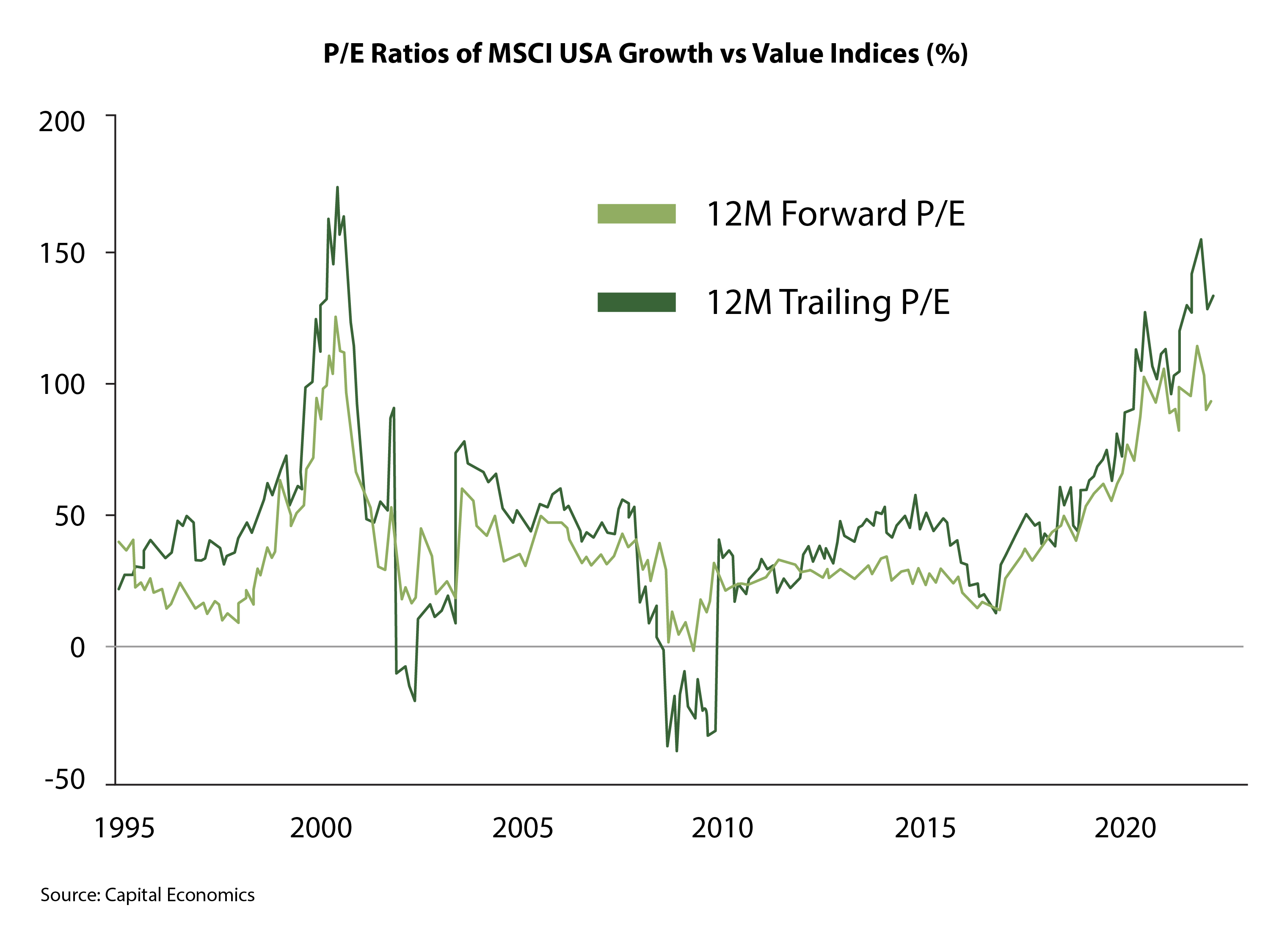 While the gaps between both the trailing and forward P/E ratios of MSCI’s USA Growth and Value indices have dropped back a bit this year, they remain nearly close to their dot com boom highs. With the above points in mind, it seems to us as if only part of these valuation gaps between U.S. growth and value stocks reflects either relatively low yields or a view of the broader economy’s growth prospects. A large share also seems to be due to an unusual degree of optimism that firms whose earnings grew rapidly during the pandemic and were expected to continue to grow much more quickly than their competitors (Netflix, Shopify, and Peloton are a few examples).

Valuation gaps of this size appeared unsustainable to us. It might have been possible for the gaps to be eroded over time by an even stronger outperformance than usual from the earnings of growth companies. However, we expected that they are more likely to be corrected by a shift in relative equity prices, leading to an outperformance of value.

“Judging by forward P/E ratios, the current valuations gap is consistent with value outperforming growth by ~6%-pts point on average over the next five years.”

Admittedly, valuations are not a great timing tool and arguably tell us more about the possible path of returns over longer time periods than shorter ones. Even so, there is a relationship between the valuation premium of growth and relative returns over the next two years and an even stronger one with returns further ahead. Judging by forward P/E ratios, the current valuations gap is consistent with value outperforming growth by ~6%-pts point on average over the next five years. We suspect that if real yields in the U.S. keep on climbing, some of that outperformance may happen sooner rather than later. We don’t expect the pressure on valuations to let up until a few months before the last rate hike, which would occur sometime in the first half of 2023. Central Banks are clearly uncomfortable with the current level of inflation and as such, are unlikely to back off from their tightening plans until inflation is more under control.

“Despite the 4% fall on May 18, compounding the already bleak year in the S&P 500, we think that U.S. equities may decline further as the U.S. economy slows and more companies struggle to meet what we believe are overly optimistic earning expectations.”

Despite the 4% fall on May 18, compounding the already bleak year in the S&P 500, we think that U.S. equities may decline further as the U.S. economy slows and more companies struggle to meet what we believe are overly optimistic earning expectations. Market volatility earlier this year can be attributed to the rise in yields, which put downward pressure on equity valuations despite solid earnings growth reports. The latest market declines highlight that earnings expectations are set to become a headwind to equities, a risk that we warned about earlier this year. It probably wouldn’t take a recession to cause more headwinds for equities, as last week’s downturn seemed to be caused by weaker-than-expected results in the retail sector, reflecting concerns that inflation is starting to erode margins. 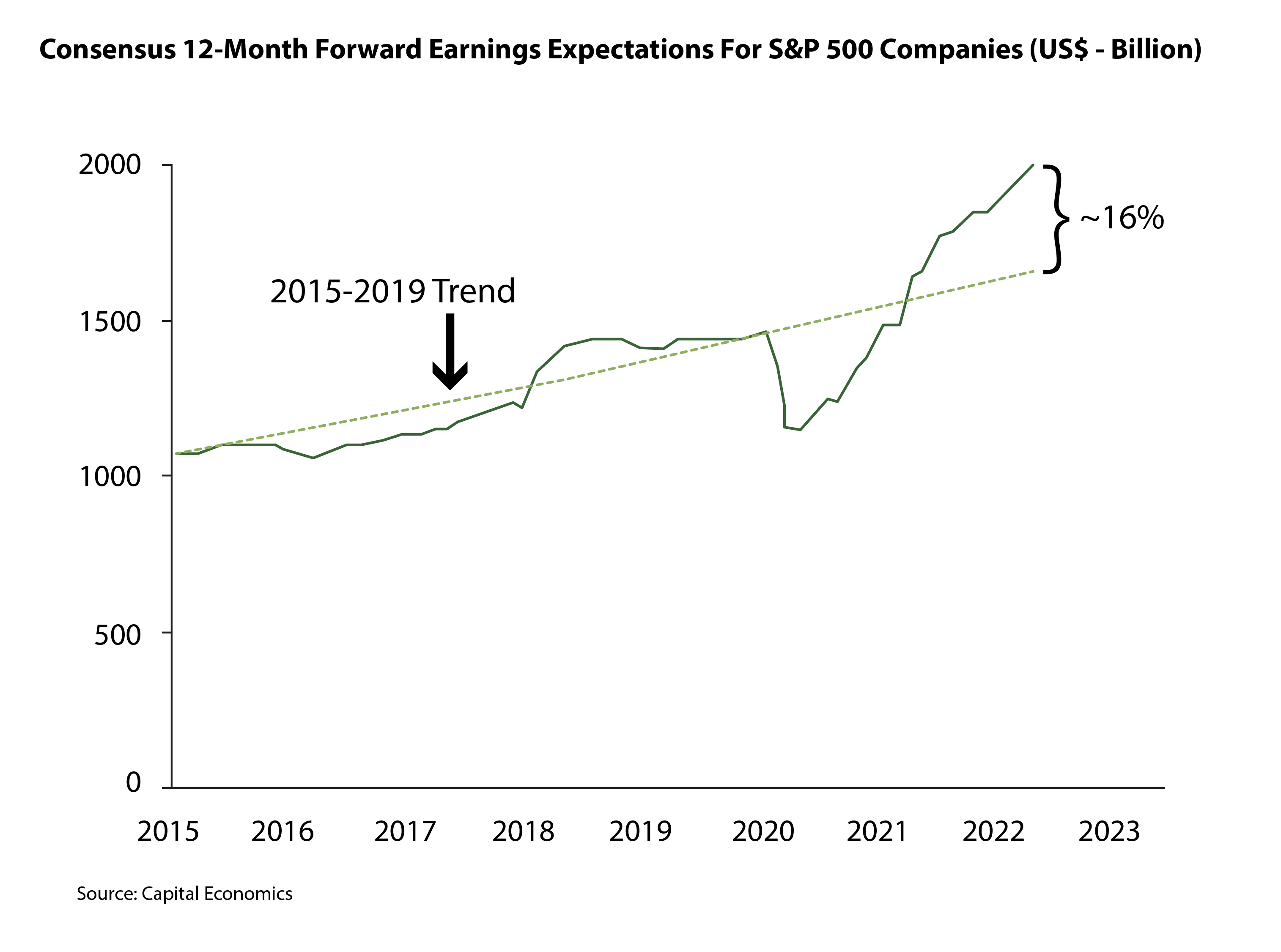 “The next few quarters will be characterised by high inflation, slower growth, and tighter monetary policy.”

The next few quarters will be characterised by high inflation, slower growth, and tighter monetary policy. Inflation will fall sharply in the second half of the year, but the leap in commodity prices has meant that it will stay higher for longer than we previously thought. Our expectations for inflation imply that the dent in households’ and firms’ purchasing power - and hence spending - will be a headwind. Combined with Ukraine-related disruptions in Europe and a muted recovery from lockdowns in China, we are more pessimistic than previously about growth prospects in the world’s major economies. Even with a weaker growth outlook, most policymakers will conclude that the path of least regret is tackling inflation before it becomes entrenched by aggressively raising interest rates. The world economy should cope with this policy tightening, but there are some pockets of vulnerability and undoubtedly lots more volatility ahead.

“We do not believe that the best course of action is to reduce risk dramatically.”

Investors may find these expectations discomforting and not the feel-good comments that one would hope for in these times. However, I think it is important to level-set expectations. We believe that we have positioned our portfolios accordingly by reducing our risks in areas that we think will suffer the greatest headwinds, and by having a diversified equity allocation that is more resilient to these headwinds. We do not believe that the best course of action is to reduce risk dramatically. Our team and managers have gone through multiple market cycles and crises and through those periods we have learned to temper our emotions and be patient. Markets can surprise both on the upside and downside; the important thing is to ensure that you are positioned accordingly so that you can continue to “fight another day.”

I encourage investors to revisit their portfolios with their Financial Advisors to ensure that they are positioned correctly given their individual circumstances and objectives.

Until next time, stay safe and be well.